(December 13) The ancient Inca capital of Cusco is today a city of about half a million people. The elevation is over 14,000 feet. New visitors may find that they tire easily and are often advised to drink coca tea to avoid altitude sickness.

The Cathedral and Convent of Santo Domingo were built starting in 1559 on the ruins of Qurikancha, the most important temple complex of the Inca empire, sacred to the sun god Inti.

In 1950 a major earthquake devastated the convent, crumbling plaster walls and revealing part of the original temple complex.

The tight-fitting mortarless Inca stonework proved to be much more earthquake resistant than European construction methods.

The original walls have been exposed and cleaned up for the benefit of scientists and tourists.

A diorama showing the original appearance of the temple, with the Inca ruler arriving in a palanquin for a ceremony.

Contemporary Spanish accounts describe the temple as being covered with elaborate gold ornamentation. The diorama is probably giving us only a hint of its former glory.

The Cathedral of Santo Domingo houses an amazing collection of artworks. Unfortunately no photography is allowed inside.

Probably the most famous painting in the cathedral is a depiction of the Last Supper which shows Jesus and his disciples enjoying roast guinea pig, chicha corn beer and Andean passion fruit. Judas turns toward the audience with his back to Jesus. His face looks suspiciously like Francisco Pizarro, the conqueror of the Incas. 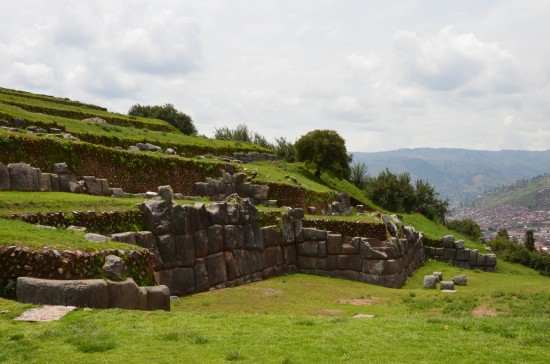 Saksaywaman, not far from Cusco, was a huge complex suitable for mass outdoor ceremonies. (The people of Cusco use it today for a traditional June solstice festival.)

The site is notable for its huge walls made of gigantic stones.

The Spanish conquerors destroyed as much of the complex as they could manage, using it as a quarry for the stone buildings they put up in Cusco. Even as late as 1940 people with the right political connections were allowed to go in with explosives and remove stones for building material.

The Inca trail to the capital.

All posts from this trip.